The French artist duo composed of Pierre Commoy and Gilles Blanchard have lived and worked together since 1976 in Paris.

Their works consist of photography and painting and are imprinted with Bollywood kitsh to transport us to their magical world in pop and shimmering colors. They staged many stars and people from around the world from Madonna to Etienne Daho via Catheriine Deneuve.

Editions VP has chosen for its catalog a poetic work with a Parisian atmosphere, Les Amants de Paris, in which the majestic Eiffel Tower seems to protect the lovers represented by the actress and director Hafsia Herzi and the model Jonathan Eap. 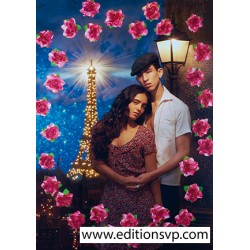